ON THE NATURE, USE AND ACQUISITION OF LANGUAGE 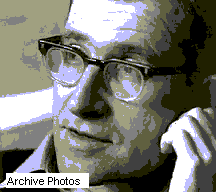 Chomsky, Noam (1928- ), American linguist, professor and political activist, licensed by the University of Pennsylvania. He is considered the founder of the Generative Grammar, an original system to approach the linguistic analysis and that it has revolutionized linguistics.

His more important linguistic publications are: Syntactic Structures (1957), Aspects of the Theory of Syntax (1965), The Sound Pattern of English (1968; with Morris Halle), Thoughts and Language (1972), The Logical Structure of Linguistic Theory and Reflections on Language (both of the year 1975).

What he does at first is to delimit the aspects of the study of linguistics that he is going to develop later. In this work / book he tries to explain as much as he can questions concerning the nature and origin of knowledge. His manner of doing it is presenting the ideas followed by linguistics in the last years and then he exposes his point of view. He places his work in the context of the natural sciences. He approaches problems of the mind by methods of rational inquiry because the investigation cannot be based only in observable data. Linguistics is linked to other disciplines such as psychology… Science has formulated its principles because science is based on observation and experimentation, so linguistics has to be explained in scientific principles. Chomsky tries to propose a linguistic theory.

In the title of the article the theme is anticipated because what he tries to explain is the nature, use and acquisition of language and, in his opinion, the important object of linguistics is to investigate the nature of the mind, so is the concern of the cognitive revolution in contrast with the behaviourist approach.

The next phase of the work is that of establishing a linguistic frame along history in relation with the theory he is going to propose. He makes a review of the central ideas of the cognitive revolution, whose main principles were developed before by other linguists, mainly in the 17th century.

At first he refers to Descartes, who argued that "the mind forms ideas that provide a conception of the objects of the external world" and of whom Chomsky thought he was right. On the other side are the empiricists, of whom Chomsky thought they were wrong. Others that seem to be on the right way are the 17th-18th century philosophers such as W. von Humboldt for whom language was a system that made infinite use of finite means. But the earliest origin of these ideas is in Socrates, when he demonstrated that the human mind incorporated some kind of innate knowledge.

For the study of language, Chomsky recognizes four big problems from the point of view of the cognitive revolution, revolution of the 50's that abandons the barren dogmas and applies classical ideas. The four problems are:

-To define what is knowledge of language (the generative grammar makes a theory of the language).

-To explain how is the knowledge used.

-To find the physical mechanisms of the brain involved in the use of the language.

Chomsky approaches these 4 problems from at abstract level.

The next thing Chomsky does is to expose one of the central ideas of the text that it is the process of learning language. It is said that this faculty is genetically transmitted and that it is unique in the human species and that it is as follows: language has an initial state that later can mature and that beginning early in life, the mind of a child acquires knowledge of the language spoken in his community. All this process happens in an unaware way. If the enviroment is good (ex: democracy), the stimulus will be favorable for the learning, a learning that is internalized, represented in the main of the child. This is what is called universal grammar.

Then Chomsky shows the changes of perspective concerning the study of language acquisition. The answers to the questions proposed above before the changes, would have been exposed in terms of habits, skills, abilities (learning of the language would be the training of an ability). But cognitive revolution provided other answers: language is a rules system, so language acquisition is a process of selection of these rules. Chomsky tries to discover evidences to support his opinion that the language faculty is innate and unique in the human specie. He equiparates the study of language with the natural sciences. There is a finite number of rules but an infinite number of interpretations.

The ideas exposed in the text are connected with the nature, use and acquisition of language. Generative grammar does not start from the observation of reality but in the first place proposes a theory about determined aspects of the language.

The main question in the text is about the use and acquisition of the knowledge of language. Chomsky supports his investigation of the cognitive psychology with an innate base; it is considered that the language learning consists mainly on the acquisition of the rules (this is basicly for the syntax, because we can learn the lexicon by heart-contrary to the beheviourist approach, which principles are based on vocabulary learned through experience).

In Chomsky, syntax (the element that relates semantics with phonetics) is the central element of language, syntactic structures are innate and vocabulary is learned. And there are two structures, the deep (determines the meaning) and the surface structure (determines its phonetic representation).

There is no doubt that human beings possess an innate predisposition to structure information. Humans start from an organized system which is innate and that it is called "initial state" (as was mentioned before). Then, circunstances make the mind to be driven to a number of different states in which the cognitive structures are represented.

"The process of maturation from the initial state to the steady state of mature knowledge is, to some extend, data-driven"

Chomsky maintains that the speed of language learning indicates that the child knows certain formal principles that determine the grammar structure of the language, so the task of the child is more accessible. These principles are universal, and they are supposed to be in the genetic heredity of humans} this is the rationalist theory of the innate ideas, opposed to the empiricist theory.

Chomsky's theory divides the universals into two: formal (specify the form of grammatical rules) and substantive (specify how these rules are applied to the real data).

In the work Syntactic Structures (1957), Chomsky proposes the theory about the generative-transformational grammar. He starts from a hypothesis: any speaker can form and understand some phrases which have not been pronounced or understood. He gives a mentalist view to the generative grammar. He says that the number of sentences of a language is infinite and that any speaker has a finite mechanism which permits to create an infinite number of sentences. In this work he calls 'switches' to the finite mechanisms.

Chomsky considers language as a 'productive' mechanism and he explains the concept of productivity and creativity in the language. Syntax will be the creative element of language, that permits the formation and comprehension of an infinite number of sentences. But creativity is governed by rules and any sentence is generated without the application of some transformational rules.

The part of the knowledge which is able to produce an infinite number of sentences is the competence. Then:

able to speak and learn all the language.

complexities of a language.

-Consists of a set of rules in the

mind which the speaker uses

for the acquisition of a language.

This opposition between competence and performance was proposed by Chomsky in 1965 and it is parallel to that of Saussure's langue vs parole. But the difference between them it is that Chomsky gives the characteristic of individuality to the competence and Saussure gives a social aspect to the langue. This is because linguistic is a part of the cognitive psychology (Chomsky) and a part of social psychology (Saussure).

Chomsky's value consist of the evidence that language faculty is unique and innate in human beings.

This work is so good (or at least, complete) that it has influenced in other disciplines close to linguistics.