In this assignment I am going to explain the following concepts, generic strategies, alternative directions and alternative methods. Indeed, I would like to support these concepts by referring my work to the automobile sector (as a continuing line provided with the Morgan´s example in class). I am going to use the example of General Motors and Ford, they are well known and also provide us a long struggling and interesting history.

The first part of my assignment gives a theoretical view of different concepts (using several examples) that are used in my assignment and, of course, in the real management world. Afterwards, I am going to explain different aspects of the US automobile industry. Finally, I would like to give some advises to each company.

Once I have explained the structure of my assignment, I would like to emphasise the fact that the Strategic Choice is the core of strategy management in a company, because is concerned with decisions about its future and the way that it is going to respond to the pressures and influences from its rivals.

Each company has to know how to develop its own strategy; therefore, it has to answer the following questions:

As an exhibit that we can see in the Johnson and Scholes book, we can explain Development Strategies as:

When answering the question of: What Basis?, we can use the concept of Generic Strategies (M. E. Porter), that includes the following options:

But this idea does not mean that low cost implies low prices (If you have a higher margin you fit your prices, and in a low prices war you have a wider range to fit low prices). An example of a company that is following this strategy is LADA.

If a company is situated in the middle of the triangle you can be in trouble because you have not a real clear objective or strategy.

I can show this idea using the Generic Strategies for Competitive Advantage Matrix (M. Porter) and displaying some examples in each box.

The 1st category includes the lowest models of each company like Citroën Saxo, Renault Clio and Ford Fiesta, as an example.

Models or brands belonging to the 2nd category can be Ford Puma and Cougar, off-road vehicles…

The 3rd Category includes low cost and narrow target; therefore we can include inside LADA, Skoda and the firsts Japanese cars that came to Europe.

Finally, in the 4th category we can include different companies like the following: Mercedes, Lotus, Ferrari, Porsche…

Alternatively, we can also use The Strategy Clock: Bowman´s competitive strategy options, because Porter´s model is a little bit antiquated. Therefore, we can use the strategy clock as a more real and updated version.

Nowadays, and during the last thirty years there has been a new kind of trade, as a consequence of globalisation and international strategy development. This new of trend between companies can be seen through the acquisition, joint ventures and alliances as an alternative methods to reach and follow the strategy of development.

We can define the different concepts as:

Acquisition: is where an organisation develops its resources and competences by taking over another organisation. As an illustrative example was the acquisition of SEAT by the VW group. Another nearly and not successful example between BMW and Rover.

Joint Ventures: are typically thought of as arrangements where organisations remain independent, but set up a newly created organisation jointly owned by the parents. An example of this it was NUMMI, the joint venture between GM and Toyota (it provided GM knowledge in strategic management and Japanese tasks, and Toyota learnt about American trade).

Alliance: is where two or more organisations share resources and activities to pursue a strategy. One example can be GMF, between GM and Fanuc (Japanese company of robotics), to design, sell and development of applications for the robotic automatization in factories.

Therefore, many of the Japanese companies were grateful to the American companies for all the joint ventures and alliances.

First of all, I would like to apologise myself because this study is not as updated as I would like to be. Nowadays, the automobile´s sector has suffered a big transformation because the companies, as an attempt to globalise the market, have developed new ways to maximise their market share. This ways have been, the acquisitions, the alliances and the Joint-Ventures (some examples can be: VW-Audi-SEAT-Skoda, Mercedes-Chrysler…). Indeed, I have got information from the 80´s and early 90´s, therefore, this ways of spreading throughout the market were not as common as now.

General Motors and Ford are the two biggest automobile companies in the world and, as a consequence of this, they have a multidivisional structure (a group of almost autonomy areas, managed by a central structure). GM has five brands, Chevrolet, Pontiac, Oldsmobile, Buick and Cadillac, each one focused in a different segment, but in global, reaching all the market.

Moreover, each one has its own culture and its own way of doing things. Ford assumed that the segmentation variable it was always the price. By the other hand, GM began to design automobiles by basing on the market preferences and different social classes.

Nowadays, in the American market there exist four big companies: GM, Ford, Chrysler and American Motors. Actually, there are not four big companies because if we analyse the automobiles market, just only one of them it is big. We can see this looking the following exhibit:

This analysis does not show the imported cars and Japanese cars (as they represent at least 25% of the quantity of cars sold in US).

There are differences between each company. Each one is the half size as the next one so, it is easy to know which company is going to win the fight. But each one also has its own objectives; Ford wants to increase its market share, Chrysler wants to survive by being profitable and American Motors will be satisfied just only surviving.

Which kind of confrontation should General Motors plain.

A total victory wouldn't be a triumph, if it could wipe out one or more of its rivals, the government would unpick the company and divide it into small companies. We can see this recently in the split threat to Microsoft. The only way that General Motors has to win is by not losing. It should use a defensive strategy. But this does not means a passive strategy, because a good managed defensive struggle is offensive, trying to hold its dominant position in the market.

The better way to follow this strategy is using alliances and joint ventures, that provides new abilities and knowledge (some examples are: GM with Isuzu, Suzuki, Daewo, Toyota; when GM wanted to learn quickly how to produce small cars)

What must Ford do?

Ford holds the second place in the market. Ford must attack GM, because GM is the leader of the market and has the biggest market share. It is obvious by seeing the percentages why Ford should attack GM, if Ford could get 10% of GM business, it would improve its position in the market in around 25%. In the other hand, if Ford gets 10% of American Motors, the effect would be difficult to estimate.

The best strategy that Ford can use is an offensive fight. It should attack the GM's weakness and develop it from there.

What must Chrysler do?

Chrysler should avoid the confrontation between GM and Ford, and attack their “sides”. These kinds of “side attacks” against all the automobile industry have been, the “Mustang”. It was the first personal car with two seats, the first “cabriolet”, the first minivan, the first frontal wheel car for six seats…

What must American Motors do?

American Motors is too small to attack General Motors, because it does not have enough distributors, industrial capacity, marketing staff and resources to hold an attack. And it is also too small to do a “side attack” against the automobile industry. Therefore, the only way is to choose a market niche and defend it like a “guerrilla” war.

Jeep is an example of this, it is the classical “guerrilla” war, finding a segment that should be as big as to get profit for it, but small enough to not be interesting for the leader.

An advice to these companies would be that, if they want to attack GM, the attack should be launched in a narrow front (as narrow as possible, as VW did when it launched its “Beetle” in US). To attack using only one product, because a wide line is a luxury that only can be held by the Leaders. This is the task that many of the companies in second or third position try to do.

I would like to emphasise and also advice the companies to use a flank and surprise attack (a whacked hit). If Ford wants to attack GM, the attack should be focused between the Chevrolet and Cadillac.

One of the things that can lead you to defeat your opponents is segmentation. Who controls the automobile industry in US? A long time ago it was Ford, however, GM chose the segmentation strategy and replaced Ford´s “empire”. Nowadays Chevrolet, Pontiac, Oldsmobile and Buick have, each one, different segments of the “automobile´s cheese”, and maybe Cadillac is the company that holds the strongest position as the leader of the luxury cars (and expensive ones) segment. Indeed, as a consequence of these five strong and independent positions, GM has the dominant role in US. 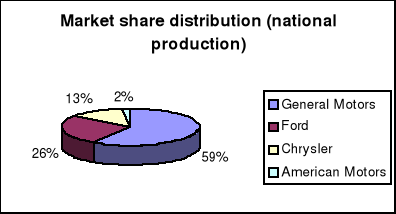