The following paper is an attemp to understand how to manage cultural differences in a business situation. I decided to work on this relatively broad, but therefore interesting topic, because I am really interested in everything related to internationalization of cultures and the interactions that play in such cases. Besides, If we consider the actual tendency of globalization, it is somehow quite important to be able and ready to face any communication or cultural problem.

Thus, through this essay, the importance of cultural differences that a manager will have to face and handle properly while working with an international team, will be analysed. Basically, I want to lead to the conclusion that there is no “the solution” when talking about intercultural management.

As a matter of fact, a team of workers is not managed the same way in Japan as it is in France or in Mexico. Cultural aspects must be understood and included for transcultural management to work out. Keeping in mind that my target is “managing cultural differences”, I will try to adapt Hofstede scheme to my paper, in order to make it clearer.

No interview was made for the writing of this paper. Basically, I based my analyse on my previous studies about international negotiations/management, my personal experience, adquired studying abroad during the last four years (United States, Spain, Mexico and Japan) and everything I observed while being introduced to a new culture and having to work with it.

At the same time I used the following references:

For a company with global ambitions, success in the next twenty years will stem from successful joint ventures and alliances. But while it is a simple matter to draw lines across the globe in the manner of the nineteenth century colonial powers and to devise a Concert, an Atlas, or a Unisource, there is no guarantee that such alliances will thrive - or even endure. Where once a global company such as Coca-Cola simply sold its product or imposed a taste, and multinationals geared the names or colours of identical products to the results of market research, the survival of transnational will depend on flexibility in managing cultural diversity.

Primarily, this entails the successful management of a multi-cultural workforce in a global context. But it also means being able to vary services across cultures: not simple marketing plays imposed from outside, but an understanding of how culture drives differences from within. A simple example of this is the way in which different cultures use the phone: an American walks into his appartment after a week away and switches on the answerphone; an Italian rings his mother. One requires an add-on device; the other needs single number dialling and favoured-number discounts. These differences may appear trivial, but they are profoundly culture-driven.

The development of genuinely transnational business organizations therefore requires managerial approaches and systems which allow for variations deriving from such diversity. This might be "national" cultural diversity between nations, races or ethnic groups (eg. in a two-nation joint-venture), intra-national diversity involving the range of cultures within a single nation (eg. in the USA), or internal cultural diversity where managers need to deal with foreign-owned transnational companies in their own country (eg. a British manager dealing with a Korean manufacturer in the UK). All this is well known, and there is so far a lot of books on the management of cultural diversity. But the problems go deeper than is often appreciated: it is not simply a matter of minding manners or learning to deal with varying attitudes to punctuality. These are the surface manifestations of much deeper differences in mental structures. A few examples will make this clear.

In a world in which cross-cultural joint ventures and alliances are essential, problems of ethics and trust will loom large. How is it possible to achieve a balance between the necessary and the contingent in business ethics, or in other words to allow for flexibility between a strong corporate ethic and the need to adapt to difficult local conditions ? And how can we learn to build a lasting trust relationship with people from a different culture ? How can managers going to the negotiating table be prepared for the very different styles they will face ? It is not merely a question of setting bargaining ranges, toning down confrontational styles, or following pre-established rules. That is sufficient for making a deal, but not for setting up a permanent alliance. It is essential to grasp the deep structures - religious, social, ethnic and ethical - which influence the way the opposite party will reason, the way they will react to different presentational styles, what they expect and how they listen.

Hofstede's view of the cultural exchange (Uncertainty avoidance, verbal and non-verbal communication, power distance and the male/female ratio), is to be considered, in order to understand properly how to handle an international negociation. As a matter of fact, the analysis of each component, of the Hofstede scheme, will help the manager in his understanding of eventual cultural barriers and though allow him to adapt to the current situation.

This requires a level of genuine understanding which goes beyond rapidly-acquired skills. Recent studies have shown how an inherent sense of cultural superiority is often enough to undermine European joint-ventures in Third World countries even when extensive training has been provided. Such "superiority" emanates from non-verbal aspects of behaviour like the tone of voice and body language, which few people other than accomplished actors are able to control. If, so, as this would suggest, humility is a key factor, how is it possible to inculcate this quality in managers whose education has often prepared them for anything but humility ?

The global operator obviously needs managers capable of working globally. Some companies are now recruiting "non-nationals" in order to resolve their problems quickly, but how does a human resource specialist trained in his own culture, who can make a rough assessment of a candidate's capabilities in a brief interview, deal with the problems of recruiting staff in other cultures ? How valid is psychological testing when applied cross-culturally ? How much do most human resource managers know about other school and university systems ?

Suppose a German manager needs to choose between, say, a Finnish, an Italian and a Portuguese. That would require an awareness not only of the very different education systems in European countries but the ways in which educational background influences patterns of thought and managerial style: how, for example, education underlies the way in which the same conflict might be addressed in France by seeking orders from a superior, in Britain by sending the people in conflict on a management course, and in Germany by employing a consultant.

Assuming for a moment that these problems can be resolved, how might the issue of dual allegiance be tackled ? For the employment of local managers necessitates the creation of loyalty on their part to a distant entity with culturally diverse norms and assumptions. Even a long-term expatriate who is nominally still of the same nationality but has in fact "gone native" might respond to an order in this way: "I'm sure my local employees won't like this, so I won't tell them and try to smooth over the issue in some other way." It can be much more difficult for the locally employed manager, especially under stress.

Then there is the nitty-gritty of everyday working together, the problem of creating the rituals, the back-room humour and the "off-stage" relationships which are so vital to harmonious corporate life. Company jokes and in-group stories, for example, are notoriously difficult to translate into other cultures: what sounds laudable to a Briton can seem risible to an Italian.

Language is another problem. Although it might appear that the use of English as the common working language of most international community favours native English-speakers, this can turn into a disadvantage when one of them is unaware of the problems that a regional accent or rapid speech might create, and how linguistic confidence can be perceived as a manifestation of quasi-colonial arrogance. Non-conformity with what might be termed the "industry pidgin" can also generate unexpected tensions.

Worse still, behind the words on the surface lurk centuries of cultural and ideological rivality which has often exploded into war. At moments of strain, when a minor conflict might have irreversible consequences, simmering stereotypes and prejudices boil up. Studies of cross-cultural teams indicate that often it is the most superficially similar cultures which in the end experience the greatest traumas: while differences such as those between the US and Japan are obvious, serious problems often occur where they are least expected - say, between Britain and Denmark - and warning signals are neither perceived nor acted upon.

Cultural training is essential to avoid potential conflict, and to improve the disastrous failure rate of joint-ventures in the recent past. In fact, most companies with global ambitions now provide cross-cultural training in order to create genuinely international managers. Yet much of this training deals with the traditional, superficial problems without seeking to explore the deep causes of underlying cultural differences. Another problem is that much of the research and background material is rapidly out-dated as the pace of change accelerates.

The problem of devising some form of training within the industry has also been recognized at the inter-governmental level, where "Cross-Cultural Training and Education" has been included among the Global Information Society projects of G-7.

No comprehensive solution to the problems of cultural diversity has yet been conceived. As a matter of fact, I doubt that a solution will ever be found since diversity implies the fact that, what is true for one, might be wrong for another. In that case, a management style might be efficient in a certain situation but totally ineffective in a different context.

So to speak, understanding might be the key word for managing intercultural differences. Besides, this so called, “understanding” of the other is not just a matter of training but also of experience and personal “reconsideration”. Yet it is clear that preparation for the successful management of such diversity in all its ramifications will be a vital component of long-term success in the global market. For while business is already global, management remains culture-bound. 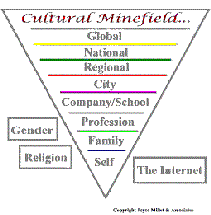