The carbon determines the conformation of the glucosids ones, from where its nomenclature comes. In an atom it can have of 3 to 7 carbons. Depending on I number of carbons will be called: 3! trislab, 4 ! tetrosa, 5 ! pentosa, 6 ! hexosa, 7 ! heptosa. You sweeten them according to the number of molecules that compose them can be: 1 ! Monosacaridos, If the chain of sacaridos has from 2 to 10 ! Oligosacaridos From 10 and without limits ! polisacaridos. Functions of you sweeten them You sweeten them have several functions, but mainly they are a great power plant. STRUCTURAL FUNCTION: You sweeten them have an important paper in the conformation and structures of the cells.

Carbohydrates are named for their characteristic content of carbon, hydrogen, and oxygen (CH2O). Short chains containing from three to seven carbons form the monosaccharides, the individual building blocks of carbohydrates. Of these, trioses, pentoses and hexoses are most common in cells. All monocsaccharides occur in linear form and each carbon atom in the chain, except one, carries an -OH group. The remaining carbon carries a -C=O (carbonyl) group. In monosaccharides all other available binding sites of carbon are occupied by hydrogen atoms. The cabonyl oxygen of a linear sugar may be located at the end of the carbon chain as an aldeyde group

Monosaccharides with five or more carbons can form a ring as well as a linear configuration. The rings form through a reaction between two functional groups in the same molecule. In the six-carbon monosaccharide (glucose), a covalent bond can form through a reaction between the aldehyde at the 1-carbon and the hydroxyl at the 5-carbon. The reaction produces either of the two closely related glucopyranose ring structures. The aldehyde at the 1-carbon can also react with the hydroxyl at the 4-carbon to produce a glucofuranose ring. Monosaccharide rings such as that of glucose are frequently depicted as a Haworth projection a diagram that suggests the three-dimension orientation of the attached -H, OH, and -C2OH groups in relation to the ring. However, the glucopyranose ring does not actually lie in a flat plane as suggested by this projection. Instead, the ends of the ring are bent up or down, most frequently in the "chair" conformation. More over, the side groups attached to the ring extend at the various angles, not at right angles as depicted in the Haworth projection. 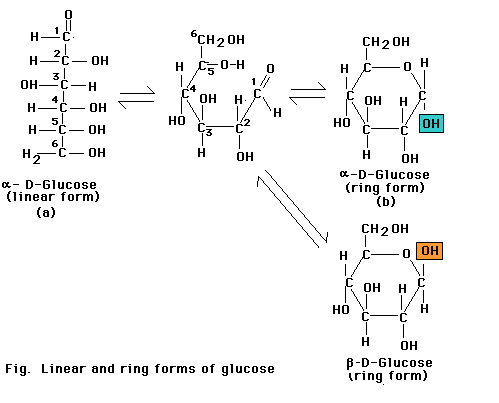 Although the difference between the two ring forms might seem trivial, it has great significance for the chemical properties of polysaccharides assembled from monsaccharide rings. For example. starches, which are assembled from a-glucose units, are soluble and easily digested. Cellulose, synthesized from b-glucose units, is insoluble and cannot be digested as a food source by most animals.

With several exceptions, the different steroisomers react at significantly different rates with D- and L- forms of other stereoisomers. Because the amino acid subunits of enzymes are stereoisomers, enzymes typically react much more efficiently with one of the two stereoisomers of monosaccharides. In most cases this is the D-form of the monosaccharide, which accounts for the fact that D-forms are much more common than L- forms among cellular carbohydrates.

Many internal carbon atoms of monosaccharides and other organic molecules are asymmetric-each of their four covalent bonds links to a different atom or chemical group. The middle carbon of the triose glyceraldehyde, for example, is asymmetric because it shares electrons in covalent bonds with -H, -OH, -CHO, and -CH2OH. 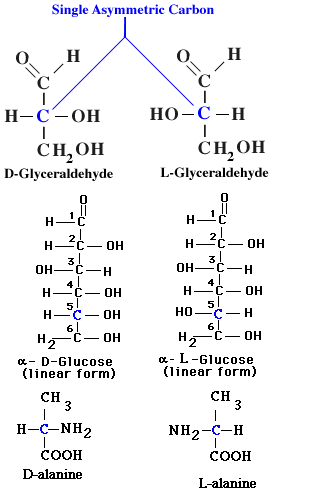 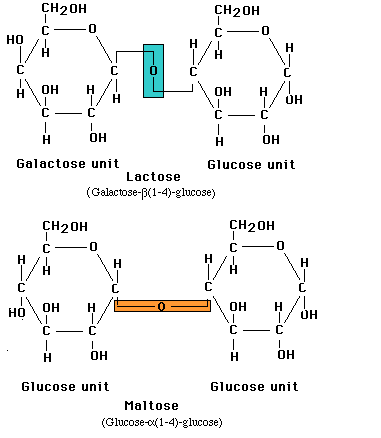 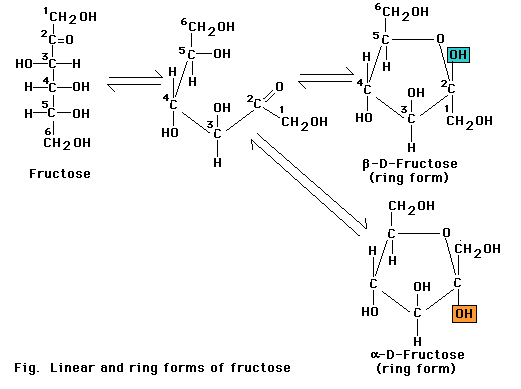 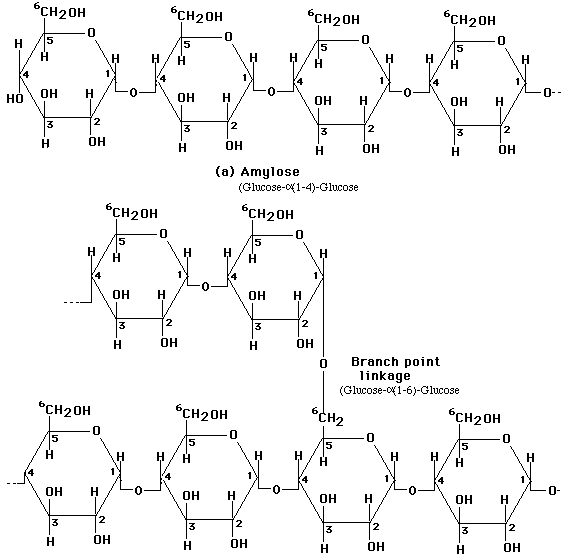