The Bermuda Triangle, also known as the Devil's Triangle, is a region of the nothwestern Atlantic Ocean in which a number of aircraft and surface vessesls have disappeared in what are said to be circumstances that fall beyond the boundaries of human error or acts of nature. Some of these disappearances have been attributed to the paranormal, a suspension of the laws of phusics, or activity by extraterrestrial beings by popular culture. Althouugh a substantial documentation exists showing numerous incidents to habe been inccurately reported or embellished by later authors, several others remain unexplained. 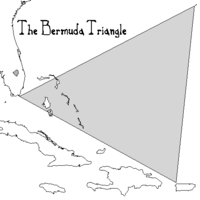 The area of the Triangle varies by author.

The boundaries of the Triangle vary with the author, some stating its shape is akin to a trapezium covering the Straits of Florida, the Bahamas, and the entire Carebbean island area east to the Azores; others add to it the Gulf of Mexico. The more familiar, triangular boundary in most written works has as its points Miami, Florida; San Juan, Puerto Rico; and the mid-Atlantic island of Bermuda, with most of the accidents concentrated along the southern boundary around the Bahamas and the Florida Straits.

Christopher Columbus was the first person to document something strange in the Triangle, reporting that he and his crew observed “strange dancing lights on the horizon”, flames in the sky, and at another point he wrote in his log about bizarre compass bearings in the area.

The mistery continued in the middle of century XIX, and since then a total more of fifty boats and twenty airplanes has disappeared in triangle. One of the most famous cases is of flight 19. Five American bombers type torpedo left Fort Lauderdale the 5 of December of 1945, in a flight of routine training and with good meteorologiques conditions. None volvi. Even hydro-plane that send to look for them desapareci. Other histories of region speak of found boats left with food yet warms up in the tables and airplanes that disappear without at least to have sent a distress signal.

Vincent Gaddis, wrote in the February 1964 Argosy Magazine to take Flight 19 together with other mysterious disappearances and place it under the umbrella of a new catchy name: "The Deadly Bermuda Triangle";he would build on that article with a more detailed book, Invisible Horizons, the next year. Others would follow with their own works: John Wallace Spencer (Limbo of the Lost, 1969); Charles Berlitz (The Bermuda Triangle, 1974); Richard Winer (The Devil's Triangle, 1974), and many others, all keeping to some of the same supernatural elements outlined by Eckert.

Flight 19 was a training flight of TBM Avenger bombers that went missing on December 5, 1945 while over the Atlantic. The impression is given that the flight encountered unusual phenomena and anomalous compass readings, and that the flight took place on a calm day under the leadership of an experienced pilot, Lt. Charles Carroll Taylor. Adding to the intrigue is that the Navy's report of the accident was ascribed to "causes or reasons unknown."

The incident resulting in the single largest loss of life in the history of the U.S. Navy not related to combat occurred when USS Cyclops under the command of Lieutenant Commander G. W. Worley, went missing without a trace with a crew of 306 sometime after March 4, 1918, after departing the island of Barbados. Although there is no strong evidence for any theory, storms, capsizing and enemy activity have all been suggested as explanations.

Captain Joshua Slocum's skill as a mariner was beyond argument; he was the first man to sail around the world alone. In 1909, in his boat Spray he set out in a course to take him through the Caribbean to Venezuela. He disappeared; there was no evidence he was even in the Triangle when Spray was lost. It was assumed he was run down by a steamer or struck by a whale, the Spray being too sound a craft and Slocum too experienced a mariner for any other cause to be considered likely, and in 1924 he was declared legally dead. While a mystery, there is no known evidence for, or against, paranormal activity.

On December 28, 1948, a Douglas DC-3 aircraft, number NC16002, disappeared while on a flight from San Juan, Puerto Rico, to Miami. No trace of the aircraft or the 32 people onboard was ever found. From the documentation compiled by the Civil Aeronautics Board investigation, a possible key to the plane's batteries were inspected and found to be low on charge, but ordered back into the plane without a recharge by the pilot while in San Juan.

Ss Marine Sulphur Queen, a T2 tanker converted from oil to sulfur carrier, was last heard from on February 4, 1963 with a crew of 39 near the Florida Keys. Marine Sulphur Queen was the first vessel mentioned in Vincent Gaddis 1964 Argosy Magazine article, but he left it as having “ sailed into the unknown”, despite the Coast Guard report which not only documented the ship's badly-maintained history, but declared that it was an unseaworthy vessel that should never gone to sea.