Along with emigration and imigration the process of demographical modernisation has brought about too a deep internal movement of population masses of unknown intensity until few years ago. It has to do with the Industrial Revolution.

Given the fact that the Spanish economic development has always been concentrated on really specific areas rather than spread out around the country, several processes have been introduced to recollocate the population.

Let's have a close look at these processes.

During the Industrial Revolution of the 19th century and onwards, many people in Spain were either:

Attracted to the growing towns (pull factors** leading to urbanisation)

The most important pull factor we mentioned above was a larger employment offer; workers were needed in the rapidly growing:

Textile towns of Sabadell, Terrasa and other mainly Catalan cities.

Coal mines in the north of Spain, Galicia, Asturias...

But it was in the 60s when the moving of people from the country to the city reached its highest point. Before those years emigration had been as high as 2,5 million people moving.

*The push factors which cause rural depopulation can be sumarised in:

No schools or any other educational centers

**The pull factors which cause urbanisation can be sumarised in:

Between about 1950 and 1980 there were lots os people migrating from the South of Spain -which experienced a steady depopulation- to the Northern regions.

More accurately, between 1951 and 1975 and according to the figures given by most of the sources we have consulted migration between provinces in Spain affected 5,23 million people, half of them being during the 60s. It was in this period when industrialisation actually took place when mass consume arrose and when population density differences between regions were more obvious. The regions that people left were Andalucia, Castilla la Mancha and Castilla-León (except Valladolid), Extremadura, Aragón (except Zaragoza), Galicia and Murcia. Asturias, Cantabria, La Rioja and Navarra experienced quite a high depopulation during some decades though during the Industrial Revolution the Basque Country was one of the most important receivers of immigrants since it was a major mining area due to its good natural resources such as wood, coal, iron and other minerals. The regions into which people migrated were mainly Madrid, Barcelona, Vizcaya and Guipúzcoa even if the population influx was also positive in other Autonomous Communities such as Valencia, Baleares and Canarias (in the 60s). But the intensity in the influx towards Barcelona and Madrid was so high that these cities absorbed two thirds of the whole of the influx registered between the turn of the century and 1975, in such a way that population density in these two areas increased greatly as can be seen in the following table:

The push factors leading such masses of people to leave these zones were, amongst others:

The pull factors were mainly:

Cycle of change in Barcelona

This migratory movement slowed down considerably from the 1973 economic crisis and until the late 80s. The amount of migrants was drastically reduced and the direction of traditional movememnts changed.

For example, the Basque Country -a region which had traditionally had a negative influx of immigrants- became one with a high positive net immigration rate. Barcelona, on the contrary, had always been an area which had received many immigrants and it then became an "expulsory" region -many people left it and went to its neigbouring small urban nuclei. This didn't happen in Gerona or Tarragona, which continued to have a net positive immigration rate and continue to have one nowadays. It wasn't until later that the proportion of population leaving big cities and province capitals grew as the proportion of migrations from small urban nuclei decreased. Barcelona has been experiencing this more and for a longer period of time than any other Spanish city.

What were the causes of so many people leaving Barcelona?

The deep change that the Spanish society has underwent since 1950 -the economy is no longer mainly agriculture-based, but a more service-centered one.

The kind of people who migrate have a higher culture and more education: they are usually skilled well-paid workers who may leave the center of the city to continue working elsewhere.

Parents with a young family looking for gardens and open space.

Cheaper m2 in the outskirts of the city.

Air pollution in the center of the city.

Lots of noise in the center of the city.

More and more facilities away from the center of the city (big stores, amusement parks, museums...)

To conclude we can say that Barcelona has been experiencing decentralisation (or counterurbanisation) ever since the early 70s although until then it had been a major immigrant recipient city in Spain.

Traditionally urbanisation occurs in developing world countries while counterurbanisation is more characteristic of developed ones. Therefore, Spain is mainly undergoing a period of time during which latter is taking place. There are three mainly significant trends:

People moving from central cities to the suburbs

Deconcentration is technically the growth of small towns and decline of larger cities though it is generally included within counterurbanisation. It means population density decreasing. Besides the ones we have already had a look at previously some factors causing this may be the search for a bucolic ideal (many authors support the idea that people nowadays have the need to live in a more armonic landscape) and the fact that many wealthy businessmen and women buy cheap rural land and then increase its value by creating prestigious low density residential areas for rich people who want to escape cities for the "rural-bucolic ideal". 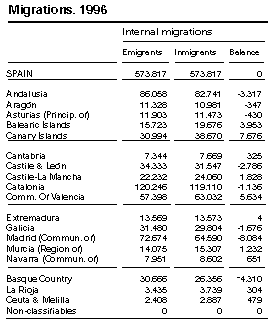 The location of converted property and new homes, which is influenced by both builder's demand and planning controls greatly affects the spatial structure of cities and the rate of decentralisation from cities. Much new housing has been built on the periphery and encouraged decentralisation. The housing stock of the inner cities may have improved but the people who used to live there have moved elsewhere and do not benefit from improvement. Equally, new jobs in inner cities may go to the commuters who live outside them. And new, lower-status jobs that indirectly result from these, such as office cleaning, may be less accessible to those inner city residents that have been displaced elsewhere.

All of this is causing that authorities -especially those in Spain- want to encourage a swing back to the appeal of urban lifestyles so that cities like Barcelona don`t get majorly depopulated. 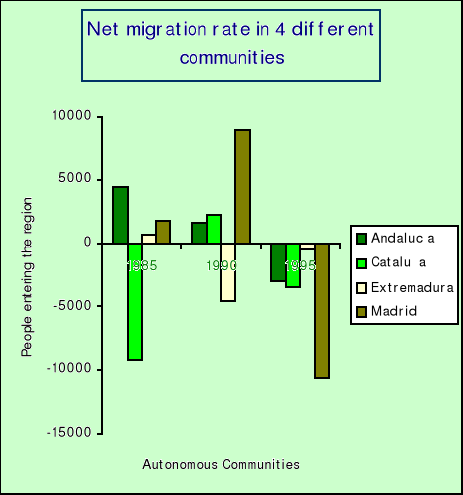