One of the world's best known advocates of non-violent social change strategies, Martin Luther King, Jr., synthesized ideas drawn from many different cultural traditions. Born in Atlanta on January 15, 1929, King's roots were in the African-American Baptist church. He was the grandson of the Rev. A. D. Williams, pastor of Ebenezer Baptist church and a founder of Atlanta's NAACP chapter, and the son of Martin Luther King, Sr., who succeeded Williams as Ebenezer's pastor and also became a civil rights leader. Although, from an early age, King resented religious emotionalism and questioned literal interpretations of scripture, he nevertheless greatly admired black social gospel proponents such as his father who saw the church as a instrument for improving the lives of African Americans. Morehouse College president Benjamin Mays and other proponents of Christian social activism influenced King's decision after his junior year at Morehouse to become a minister and thereby serve society. His continued skepticism, however, shaped his subsequent theological studies at Crozer Theological Seminary in Chester, Pennsylvania, and at Boston University, where he received a doctorate in systematic theology in 1955. Rejecting offers for academic positions, King decided while completing his Ph. D. requirements to return to the South and accepted the pastorate of Dexter Avenue Baptist Church in Montgomery, Alabama.

On December 5, 1955, five days after Montgomery civil rights activist Rosa Parks refused to obey the city's rules mandating segregation on buses, black residents launched a bus boycott and elected King as president of the newly-formed Montgomery Improvement Association. As the boycott continued during 1956, King gained national prominence as a result of his exceptional oratorical skills and personal courage. His house was bombed and he was convicted along with other boycott leaders on charges of conspiring to interfere with the bus company's operations. Despite these attempts to suppress the movement, Montgomery bus were desegregated in December, 1956, after the United States Supreme Court declared Alabama's segregation laws unconstitutional.

In 1957, seeking to build upon the success of the Montgomery boycott movement, King and other southern black ministers founded the Southern Christian Leadership Conference (SCLC). As SCLC's president, King emphasized the goal of black voting rights when he spoke at the Lincoln Memorial during the 1957 Prayer Pilgrimage for Freedom. During 1958, he published his first book, Stride Toward Freedom: The Montgomery Story. The following year, he toured India, increased his understanding of Gandhian non-violent strategies. At the end of 1959, he resigned from Dexter and returned to Atlanta where the SCLC headquarters was located and where he also could assist his father as pastor of Ebenezer.

Although increasingly portrayed as the pre-eminent black spokesperson, King did not mobilize mass protest activity during the first five years after the Montgomery boycott ended. While King moved cautiously, southern black college students took the initiative, launching a wave of sit-in protests during the winter and spring of 1960. King sympathized with the student movement and spoke at the founding meeting of the Student Nonviolent Coordinating Committee (SNCC) in April 1960, but he soon became the target of criticisms from SNCC activists determined to assert their independence. Even King's decision in October, 1960, to join a student sit-in in Atlanta did not allay the tensions, although presidential candidate John F. Kennedy's sympathetic telephone call to King's wife, Coretta Scott King, helped attract crucial black support for Kennedy's successful campaign. The 1961 "Freedom Rides," which sought to integrate southern transportation facilities, demonstrated that neither King nor Kennedy could control the expanding protest movement spearheaded by students. Conflicts between King and younger militants were also evident when both SCLC and SNCC assisted the Albany (Georgia) Movement's campaign of mass protests during December of 1961 and the summer of 1962.

After achieving few of his objectives in Albany, King recognized the need to organize a successful protest campaign free of conflicts with SNCC. During the spring of 1963, he and his staff guided mass demonstrations in Birmingham, Alabama, where local white police officials were known from their anti-black attitudes. Clashes between black demonstrators and police using police dogs and fire hoses generated newspaper headlines through the world. In June, President Kennedy reacted to the Birmingham protests and the obstinacy of segregationist Alabama Governor George Wallace by agreeing to submit broad civil rights legislation to Congress (which eventually passed the Civil Rights Act of 1964). Subsequent mass demonstrations in many communities culminated in a march on August 28, 1963, that attracted more than 250,000 protesters to Washington, D. C. Addressing the marchers from the steps of the Lincoln Memorial, King delivered his famous "I Have a Dream" oration.

During the year following the March, King's renown grew as he became Time magazine's Man of the Year and, in December 1964, the recipient of the Nobel Peace Prize. Despite fame and accolades, however, King faced many challenges to his leadership. Malcolm X's (1927-1965) message of self-defense and black nationalism expressed the discontent and anger of northern, urban blacks more effectively than did King's moderation. During the 1965 Selma to Montgomery march, King and his lieutenants were able to keep intra-movement conflicts sufficiently under control to bring about passage of the 1965 Voting Rights Act, but while participating in a 1966 march through Mississippi, King encountered strong criticism from "Black Power" proponent Stokely Carmichael. Shortly afterward white counter-protesters in the Chicago area physically assaulted King in the Chicago area during an unsuccessful effort to transfer non-violent protest techniques to the urban North. Despite these leadership conflicts, King remained committed to the use of non-violent techniques. Early in 1968, he initiated a Poor Peoples campaign designed to confront economic problems that had not been addressed by early civil rights reforms.

King's effectiveness in achieving his objectives was limited not merely by divisions among blacks, however, but also by the increasing resistance he encountered from national political leaders. FBI director J. Edgar Hoover's already extensive efforts to undermine King's leadership were intensified during 1967 as urban racial violence escalated and King criticized American intervention in the Vietnam war. King had lost the support of many white liberals, and his relations with the Lyndon Johnson administration were at a low point when he was assassinated on April 4, 1968, while seeking to assist a garbage workers' strike in Memphis. After his death, King remained a controversial symbol of the African-American civil rights struggle, revered by many for his martyrdom on behalf of non-violence and condemned by others for his militancy and insurgent views. 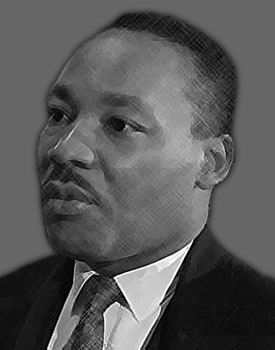 In his speech ¨I Have a Dream¨