Magnesium is the twelfth (12) element in the PERIODIC TABLE. It was discovered in 1808 by Humphry Davy.

Magnesium is very light and a metal. Both you and plants need magnesium to live. It is called a TRACE METAL. Check out the blackboard. That box on the left has all of the information you need to know about one element. It tells you the mass of one atom, how many pieces are inside and where it should be placed on the PERIODIC TABLE. 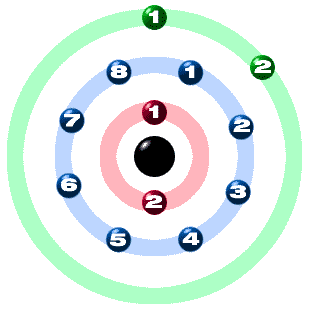 Each of those colored balls is an ELECTRON. In an atom, the electrons spin around the center, also called the NUCLEUS. The electrons like to be in separate SHELLS. Shell number one can only hold 2 electrons, shell two can hold 8, and for the first eighteen elements shell three can hold a maximum of eight electrons. As you learn about elements with more than eighteen electrons you will find that shell three can hold more than eight. Once one shell is full, the next electron that is added has to move to the next shell.

Magnesium is a very important element to plants. When you see anything that is green on a plant leaf, that's because of magnesium. Magnesium is an needed to make chlorophyll, and the chlorophyll makes plants green.

Magnesium is used in flash bulbs. When magnesium burns, it makes a very bright, white light. Photographers use that white light to help them work in the dark.

Magnesium is also used in medicines.

Magnesium is able to bond with one Oxygen atom. The formula of the compound is MgO. You can see in the dot structure that the two atoms share 4 different electrons. When a bond is made with four electrons, it is called a double bond. It is stronger than a single bond which only uses two electrons

Magnesium dichloride is commonly known as Magnesium chloride. You can use either name when talking about the compound. Since Magnesium has two extra electrons it looks around for elements which could use them. In this case, Magnesium bonds with two Chlorine atoms which each need one electron. With the additional electron, Chlorine has a filled shell and Magnesium loses two electrons. Magnesium also has a filled shell.