of the living phenomeno has motivated the sprouting of strong preoccupations

and on attempts of limitations and prohibitions the restrictions legals. In

some cases aim to avoid abuses, discriminations and dangers. In this just line

it is possible to be located to the work of the UNESCO, which persecutes the

establishment of a universal declaration on the principles that must regulate

the human beings. Also are reasonable the multiple initiatives destined to

impose restrictions to him to the reproductive clonation, is worth to say to

which it persecutes to clonar human beings, the multiple risks who it can

bring, according to it have denounced most prestigious cientifics. Of made

doctor Severino Antinori, who has obtained that in marginal geographies is

made possible to develop to the first baby clone. Imprudence, omnipotencia,

uncontrol, eagerness of profit an manipulation of the expectations of

repairs etics. In change, is different the case from the therapeutic clonation,

successfully. To prohibit the investigation in this land, if the development of

knowing would be being been uniting is that they could cure suffering.

Cause, then a just preoccupation the initiative of the president of the United

States,George W. Bush, prohibiting all the forms of human clonation, as

much the reproductive ones as the therapeutic ones. As it happens in many

areas, the decision of the central countries will repel in the rest, is for

repeating decisions, is for becoming seats of practices prohibited in others

societies. The doctors evaluate the risks of the human clonation like very

elevated. To submit itself to the clonation on the part of the humans does not

mean to assume a unknown risk, but to harm to the people consciously, has

who is in agreement with the clonation for the obtaining of a baby. Some

even, can be parents who lost a baby an whom they love to replace it, or they

traditional way. For example, in case that a man cannot produce sperm, it can

do that his own DNA it is introduced in the ovum of his pair, creating a clone

of himself. With the clonation, the kind man against the life of his same

types in name of the well-being and of justice. When the speech of human

clonation one thinks fundamentally about two possibilities: to clonar human

beings as a new form of reproduction, and to clonar human embryos to obtain

certain diseases. The human clonation is ineffective and is probable that it

continues it being in the future. Most of the clonations they cause alterations

of the development that are shown in the gestation or when being born.

In the best one of the cases, only a small percentage of the embryos created

by transference of the nucleus gets to be born and, of these,very few surpass

the perinatal period. The dysfunctions of the placenta seem to be the main

cause of death during the gestation. The clones new born present/display,

frequently, problems respiratory and problems of circulation, to which it

attributes the numerous deaths that take place in the neonative period. The

apparently healthy survivors even can undergo immune dysfunctions or

cerebral malformations or of the kidney, that causes their death later. Thus,

in case the human clonation is undertaken, the problem will not be only the

embryos that die, but those that will survive to become children or adults

abnormals. Las abnormalitys who present/display the clonados fetuses and the

few clones that get to be born are not attributable to the nucleus of the donor.

The most probable explanation is the failures in the genetic reprogramming.

reprogramming, that would produce a deregulation in the expression of the

genes. Some of the clones that survive the neonative period are probable that

they undergo underlying epigenéticos defects that, nevertheless, did not reach

the threshold from as the viability is it jeopardize.

failures and defective human beings. In addition this low rate to success would

need to use a high number of embryos, which would worsen the problem of

the storage and use of the leftover embryos. The reproductive clonation would

happen to become a consumption act more: something that is bought to

acquire a material good; in this case an identical human being to another one.

The human clonation creates delicate problems of identity and human

relations, specially in the family: All we are able to imagine, which could

happen if in our home was born a clone boy. Think for example about the

parents - what it is very probable, because the personality only depends partly

on the genetic patrimony the potential disadvantages of the human clonation

are in his opinion mainly the medical risks, for example the uncertainty on

“THE CLONATION OF HUMAN BEINGS” 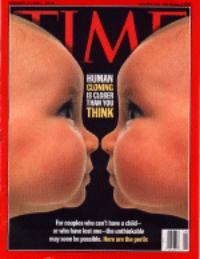 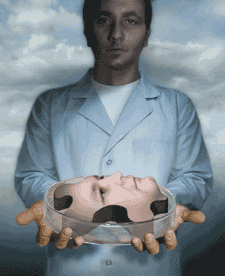