1 - Read the story introduction on the first page of the book, and the back over. How much do you know about this story ? Tick one box for each sentence.

2 - Can you guess what happens in this story ? Use this table to make some sentences about your guesses.

Read Chapters 1 and 2, (Jonathan Harker's Diary), and then answer these questions.

1- Why didn't Jonathan want to go to Transylvania ?

- Because he was planning to get married in the autumn, and he didn't want lo leave his beatiful Mina.

2- Why was Count Dracula pleased that his new house in England had a little church?

- Because he will be near the dead.

3- Why was Jonathan afraid when he looked in the mirror ?

4- Why did the three women want to kiss Jonathan ?

-Because they wanted to get blood for aliment and women were vampires.

5- Why couldn't Jonathan leave the castle ?

-Because Count Dracula took away his other clothes and his travel papers, and he locked the door of his room.

6- Why didn't Jonathan kill the Count in his coffin ?

-Because a cold win ran through the castle and, with a crash, the door of the Count's room closed and locked.

7- Why did Jonathan decide to escape ?

-Because he was alone in the castle with those terrible vampire women.

Read Chapter 3 (Mina's Story). What did Mina see, hear, or do? Complete thse sentences with the words from the chapter.

1- At Whitby she heard about black dog wich jumped off the strange ship from Varna.

2- She saw a white face and burning red eyes behind Lucy in the churchyard.

3- The she saw two little drops of blood on Lucy's neck.

4- She went to see him because Jonathan was ill there.

5- In Jonathan's diary she read about this adeventure in Count Dracula's castle.

6- She saw Count Dracula in the streets of London.

7- In a letter from Arthur she heard that he knew only that i must do something quickly, so he asked our old friend, Jack Seward, to come and see her.

Before you read Chapter 4, can you guess the answers to these questions ?

1- Will Arthur Holmwood find out why Lucy died ?

2- What will happen to Lucy after her death?

Lucy's face was pale and still, but it was now quiet and restful.

Read Chapter 4 (Jack Seward's Story), and then answer these questions.

Jack Seward was a doctor and Arthur's friend.

Jack Seward could see that Lucy was very ill.

3- Who was Professor Van Helsing ?

Van Helsing was a doctor who was Jack Seward's professor.

4- What did Van Helsing say they must do?

They must watch Lucy every night, and be sure that she wears the garlic flowers.

5- Why weren't Arthur, Van Helsing, or Jack with Lucy on the night that Dracula came ?

Because Arthur had to go back home because his father was dying. Because Van Helsing returned to Holland and Jack worked at the hospital during the day.

6- Why did Lucy ask Arthur to kiss her ?

Because Lucy's face was hard an angry.

7- What happened to Lucy after her death ?

Arthur put this head in his hands and cried.

9- What did the three men decide to do after that ?

The three men, open Lucy's coffin at night for show to Arthur that Lucy was a vampire.

Before you read Chapters 5 and 6, can you guess what happens? Choose Y (yes) or N (no) for each sentences.

Read Chapters 5 and 6, (Jonathan Harker's Diary), and then join these halves of sentences.

1- Dracula's London house was full of coffins because he used them as daytime hiding-places.

2- On the night when the four men went out to put holy bread in Dracula's coffins, Dracula found Mina alone in Jack Seward's house.

3- Mina knew that Dracula was on ship because she could hear his toughts in her head.

4- The friends went by train to Varna, but there they learnt that Dracula's ship was at Galatz.

5- Mina wanted her friends to kill her before she changed into a vampire.

6- Jonathan, Arthur and Jack caught Dracula's cart in the mountains, just before the sun went down.

7- Jonathan pushed the coffin to the ground and drove his knife deep into Dracula's heart.

8- When they looked into the coffin again, it was empty.

1- What is a vampire ? Complete the passage with these words from the story. Use each word once: become, bites, blood, bread, coffin, cross, day, dead, garlic, hammer, heart, ill, mirror, night, sharp, wood and wounds.

A vampire is the body of a become person that drinks the blood of living people. If you look at a vampire in a mirror you see nothing. During the day it lies quietly in its coffin, but at night it comes out and tries to catch people. I has long sharp teeth, and it bites into people's necks and leaves two small wounds there. After a time the person will get ill and die, and then dead a vampire too.

You can frighten a vampire away if you wear a circle of garlic flowers around your neck. Or you can hold a holy cross, or put holy bread in its coffin. The best way to kill a vampire is to take a hammer and drive a lon piece of wood through the vampire's heart.

2- Now write a short description of Count Dracula. Use these notes to help you.

His face was very white, his ears were like the ears of a cat, and his teeth were strong like the teeth of an animal.There was hair on his hands and his fingers were very long.He lives in a castle in Transylvania and is very dangerous.

3- Here are some sentences from eight different letters in the story. Who wrote them, and to whom? Choose the right people from the list below. Then put the letters in the order in which they were written.

1- Budapest Hospital to Mina ...and we are sorry to tell you that she is very weak.It won't be long now.Come as soon as you can.

2- Jonathan to Mr.Hawkin ...The Count has asked me to stay here fot another month.I hope that you will not need me in the office.

3- We have a young Englishman here, who was given us your name.He is still very ill and would like to see you, if you can make the journey from England... Van Helsing to Jack.

4- Jack and Van Helsing to Arthur ...Don't forget - you must watch her all night! Don't leave her for a minute, or she'll be in great danger.

5- Jack to Professor Van Helsing ...You helped me so much when I was your student.Now I need your help for a dear friend.

6- I have some very sad news.You have lost a dear friend, and I have lost the girl I loved. It happened like this... Arthur to Mina.

7- Arthur to Dr Jack Seward ...You're my oldest friend, and also a doctor, so perhaps you can help her and find out why she is so ill.

8- My work in Transylvania is finished and I am coming home.I'm a Bristitz already, and will see you soon... Jonathan to Mina.

4- Here is a new illustration fot the story. Find the best place in the story to put the picture, and answer these questions. 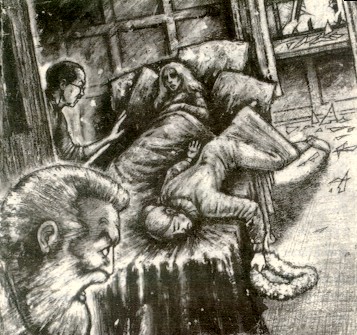 a) Who are the four characters in the picture ?

b) What has just happened ?

Dracula stayed in Lucy's room and bite her and her mother.

c) What happens next ?

5- Van Helsing has to tell Arthur that Lucy is a vampire. Put their conversation in the right order and write in the speakers' names.Van Helsing speaks first (number 9).

Van Helsing: Arthur, I have something terrible tell to you.

Arthur: What! Lucy - a vampire? That's not possible!

Van Helsing: I'm afraid it si possible,There is a vampire - a beatiful lady - who is catching small children at night. She bites their necks and drinks their blood..

Arthur: How horrible! But it can't be Lucy! It can't be!

Van Helsing: This is worse. Lucy was killed by a vampire, and she has now become a vampire herself.

Arthur: What could be worse than my Lucy's death?

Van Helsing: Because Jack and I have seen her empty coffin.Come with us tonight, and we can show.

Arthur: I can' believe this.I don't want to believe it.But I'll come with you and see for myself.

Van Helsing: It is her, Arthur.She leaves her tomb at night..

Arthur: How do you know she leaves her tomb?

6- What do you think about vampires? Do you agree (A) or disagree (D) with this ideas? Explain why.

1- Stories about vampires are fun to read. (D) Because the difficulty depend of the level with you choose your book.

2- Nobody believes in vampires today. (A) Because the vampires are a terror story for young people and is a typical story for read.

3- It is more frightening to see a film about Dracula than to read a book about him. (A) Because with the film you are more nervious and you are very atent.