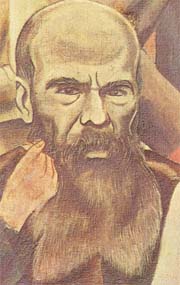 That History is developed in Russia on XIX century.

Raskolnikov was a poor student with a good heart. In those times the situation of Russia was very bad, and there were lots of people who did not have money to eat, and Raskolnikov was one of them.

In the building where he lived, and old and avaricious woman lived there too. She was a moneylender, but she swindled to people giving them less money by their properties. All nights Raskolnikov thought in how he could kill her and rob all her money.

Raskolnikov met a beautiful girl named Ivannova and he felt in loved of her; he used to give her gift and money because her family was so poor and she had to work as prostitute to make money.

One day he needed the money with urgency because the father of Ivannova had died and they did not have money to bury him.

Raskolnikov ran into the building and went to see the old woman. He hung her and took all the coins that he could, but when he was left the room, a nice and kind woman saw him and he had to also kill her.

Raskolnikov tried to justify his crime with the idea that everything is allowed to a superman like him. With this money he helped to his friend's family and hid the rest of the currency under a bridge.

Nevertheless nightmares and remorse seizes did not let him live. The policemen started the investigations and he was one of the suspect. Raskolnikov had to talk about what he had seen, but he felt so bad at the moment and fell sick. He though that a person like her did not had value, and he had benefited the humanity killing her.

He did not supported more and confessed the crime. He was judge and deported to The Dungeons of Siberia.

The treatment was cruel and the weather was so cold. Raskolnikov was taken to the hospital because of the wounds that he had. When he woke up after two days in comma, surprisingly saw at his beautiful friend who had offered herself to serve as a nurse in Siberia. She followed him to prison and at the end he discovered that the true freedom is founded on the generous given to the people around us.

I decided to read this book because at school I studied about Feodor Dostoievski, and I was so interested in reading one of his books.

Written in 1866, this is his most famous novel. Dostoievski is a realism writer because all his books have the characteristic of the meticulous description.

I liked very much the whole story, because I was deep and interesting in general, but for me, was so hard to read a book like this, because has a different way to say the things, and in English it is more difficult, because the book is to long, with a lot of new vocabulary and with lots of extra-information that in some cases bored to the reader.

In fact, in these times is difficult to read a book, because we do not find available time in our schedule or because we don not have the culture of reading, but in particular is very rewarding for me to read and more if are works of Classic Literature.