Chinese ceramic ware is an art from that has been developing since the dynasty period.China is richly endowed with the raw materials needed for making ceramics. The first types of ceramics were made about 11,000 years ago, during the Palaeolithic era. Chinese Ceramics range from construction materials such as bricks and tiles, to hand-built pottery vessels fired in bonfires or kilns, to the sophisticated porcelain wares made for the imperial court.

is a type of ceramic. It is distinct from enrthenware, and stoneware.The Chinese tradition recognizes two primary categories of ceramics, high-fired, and low-fired. The oldes chinese dictionary define porcelain as fine, compact pottery. Chinese ceramic wares can also classified as being either. Present-day China comprises two separate and geologically different land masses, brought together by the action of continental drif and forming a junction that lies between the Yellow River and the Yangtz river. The contrasting geology of the north and south led to differences in the raw materials available for making ceramics.

Chinese porcelain is mainly made by a combination of the following materials:

Sancai-the colours of the glazes used to decorate the wares of the Tang dynasty were not limited to three in number. 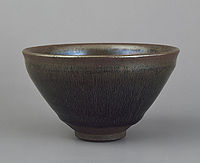 Jian-blackwares, mainly comprising tea wares, were made at kilns located Jianyang of Fujian.

The tensions between China and Taiwan were start in the 1949 Chinese revolution, when communists led by Chairman Mao claimed control of the mainland.

They are two goberments and two nacions totally different from each other. when china was in a war with united states, and then they start to think that taiwan was yours, but that's not true because taiwan is independient. Now taiwan has a lot of people living in it, they sold a lot of things, they are so advanced. China look taiwan like they are from china too, but taiwan think that they are a country like the others. But china continue insisting that taiwan is a local government of china.

The conflict between taiwan and china was 1946 to 1949. The U.S. considered Taiwan a buffer against communist expansion in Asia and provided the island money and military supplies. Eight years later, the United States formally recognized the People's Republic of China, severing official diplomatic relations with Taiwan. Then the Americans accept china like an only one. Taiwan is not looking like an independent nation in other countries but there are people that look Taiwan independents.