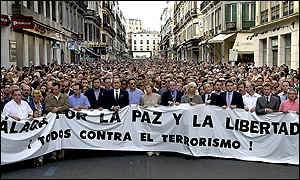 It is 42 years since ETA was founded. Only a total lack of political knowledge could make someone say that nothing has changed in the Basque Country since then.

I share the views of most experts that Franco's Regime and its repressive way to impose a homogeneous Spain was the main cause for the rising of the terrorist band. However, we cannot forget that we now live in a completely different situation. And most important of all, although most Basque citizens have known and suffered from Franco's Dictatorship, only a minority supports or justifies ETA's violence.

This reports includes a brief background of ETA, an objective explanation of the current situation in the Basque Country and a descriptive enumeration of the most significant news that have been published in the British newspapers about the terrorist band during March 2001.

ETA is a Basque separatist organisation in Spain that adopted violent methods in its campaign for an independent Basque state.

ETA grew out of the PNV (Basque Nationalist Party) and managed to survive, though illegally, under Francisco Franco's fascist regime by maintaining its headquarters in exile in Paris and keeping quietly out of sight in Spain.

In 1959, some youth members of PNV broke away and founded ETA. Within the next few years, the new organisation developed groupings associated increasingly with Marxist positions, setting revolutionary socialism as their political orientation.

Factionalism continued inside ETA in the 1970s and `80s, with various internal divisions into both violent and political groups. After Franco's death in 1975, Spain's democratic governments moved to establish regional autonomy for the Basque provinces. PARADOJICAMENTE, the political party which has remained in office since then is the PNV.

In the decade after Franco, the number of ETA killings by bombing and assassinations multiplied by ten over what had existed under Franco's ironhanded repression. Most of the assassinated were high-ranking Spanish military officers, judges, and government officials, such as Carrero Blanco, Spanish former Prime Minister in 1973, who was killed by a car bomb. 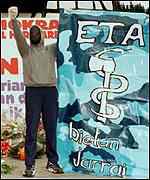 ETA has been financially supporting its terrorist activities with robberies, kidnappings and “revolutionary taxes” extorted from, mainly, Basque businessmen.

It formed political front organisations to face and contest elections in the post-Franco period while also continuing with bloody campaigns to achieve its goals. Currently, ETA's political wing is EH (Euskal Erritarrok) and is supported by around the 18% of the Basque society.

Both, Spanish and Basque policemen, have done a great job in the last years capturing and jailing ETA's leaders, but the violent band has remained active until the present mainly due to the recruitment of new rebellious young attracted by the independence cause. Nowadays, ETA has got two youth wings: Haika and Jarrai, whose 4000 members are aged 15-25, approximately.

Politicians, journalists, judges, businessmen, soldiers and policemen have all suffered the effects of the violence of ETA in Euskadi (Basque Homeland) and a wave of pessimism has begun to take hold. The national mood in Spain is grim.

Hundreds of thousands of citizens, in the Basque Country or far from it, parade their rejection and repulse to ETA in the streets after the almost successive violent and bloody terrorist's episodes; more than 3000 people in the Basque Country have received death threats and can no longer go their daily lives without armed bodyguards; among the Basque society, and specially among youth, a feeling of odium and hostility is increasing steady day after day; though the PNV (Basque National Party) is still the largest party in the assembly, it has been in minority to govern, which has led to the sign of notorious and controversial deals with the terrorist group through its political wing EH (Euskal Herritarrok), such as the “Pact of Lizarra”; anyone who speaks out against the separatists or opposes the cause of independence risks becoming an ETA's target.

These are nothing but just a few examples of the extremely deep-rooted climate of confrontation that exits in the Basque society nowadays. 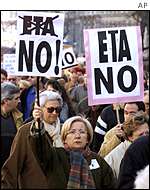 The biggest difference, though, is political. If we have a look at the Spanish's recent History, only a third of Basque Country voters backed Spain's new Constitution in 1978. Moreover, essential factors such as the existence of political autonomy in the region, their own basic law, the spreading of the language and so on, have done nothing to stop violence. What nationalists want is the right to a country of their own. It is for this, and only this, that ETA kills. Unfortunately for the radicals, basques are divided equally by their sympathy and antipathy to the idea of independence. This is due, in good measure, to the turnaround of the PNV, which has been in Basque Country's office almost continuously since the arrival of the democracy. In fact, as a consequence of one of these pacts, ETA called a ceasefire in the autumn of 1998 with the aim of seeking the independence by negotiation. Obviously, this was just a mirage and 14 months later, with the truce over, ETA's return to terror has caused great acrimony among Basque nationalists of all parties. Since then, 28 people have died, so the total number of killings perpetrated by the terrorists has sadly surpassed the brutal amount of 800 in the last 30 odd years.

It is unclear how Jose Maria Aznar, Spain's former Prime Minister, and its party PP (Partido Popular) are going to face and success this political and social nonsense. Now that the heat is on the PNV, Aznar's aim is to get the PNV out of government as the first step to pave the political way to a peaceful settlement in the troubled Basque Country. His first attempt will be in three days when the Basque Country elections are held on May 13th, after the early and expected dissolution of the Parliament. Aznar's plans depends on the co-operation from the Socialists, which is likely to be but is not assured yet. Both parties, the two most important democratic ones, signed on an antiterror agreement at the end of last year. This was seen by some as the prelude of a coalition government in the Basque region. However, plenty of uncertainly lies ahead.

National attention is focused on the ETA problem. President Aznar shows signs that he has the strategy but many people doubt that it is the correct one. The terrorist group multiplied its attacks and assassinations throughout 2000. Although there have been periods of greater terrorist activity, especially during the late 1970s, there has never been such visible confrontation among the Basques themselves.

Tragically, 2001 is being another year soured by tension in Euskadi, the Basque Homeland. Last March was not an exception. A wide range of terrorist activities has occurred over this terrible month. English Newspapers have reported the following:

Some consider ETA's members to be bloodthirsty killers. Others admire them as heroes. The reality is that over 800 people have lost their lives at the hands of the terrorist band. This is inadmissible. How much longer is this nightmare going to last?

You cannot have a dialogue neither with people who kill nor the ones who support them. Taking into account that the possibility of a potential Army action in the Basque Country is inconceivable, the unique procedure to finish this absurdity is through democratic elections.

An historical change is waiting for the Basque society with the next polls on the13th of May. This exceptional situation will, hopefully, return to the normality expected in a peaceful and advanced country as Spain.