Airplane, also called AEROPLANE, or PLANE, any of a class of fixed-wing aircraft that is heavier than air, propelled by a screw propeller or a high-velocity jet, and supported by the dynamic reaction of the air against its wings. Two kinds of aircraft without fixed wings that are classified as airplanes are the STOL airplane and the VTOL airplane. A brief treatment of airplanes follows.

The essential components of an airplane are a wing system to sustain it in flight, tail surfaces to stabilize the wing, movable surfaces (ailerons, elevators, and rudders) to control the attitude of the machine in flight, and a power plant to provide the thrust to push the craft through the air.

An enclosed body (fuselage) houses the crew, passengers, and cargo, as well as the controls and instruments used by the navigator. An airplane also requires a support system (such as wheels or pontoons) when it is at rest on a surface and during takeoff and landing.

Most airplanes in use today are monoplanes (i.e., aircraft with a single pair of wings). They are termed high-wing when the wing is attached at the top of the fuselage, midwing when it extends from or near the centre of fuselage section, and low-wing when the wing structure fastens to the fuselage structure at the bottom. The multiplane with two or more horizontal wing systems, one above the other, connected by a series of struts and wires, has virtually disappeared.

The few biplanes still in service are used mainly for sport flying or for agricultural crop dusting. Monoplanes may be characterized by the planform (top view) of their wings, which may be rectangular, tapered, swept-back, or delta. A so-called variable-geometry concept incorporating adjustable sweepback is a compromise to obtain good high- and low-speed characteristics from the same wing.

For takeoff and landing, hinged wing panels are extended at right angles to the fuselage in order to utilize the advantages of long-span and high-aspect ratio. For high speed and maneuvering in flight, the panels are swung rearward to make (with the tail surfaces) a delta configuration. The normal location for stabilizers, fins, rudders, and elevators is well behind the wing, mounted on the tapered tail section of the fuselage.

The standard arrangement (until the advent of jet engines) was a cruciform assembly, with vertical fins and rudders and horizontal stabilizer and elevators forming a cross, the axis of which was approximately coincident with the fuselage axis. In some large, high-wing airplanes with relatively short, large-diameter fuselages, airflow over the horizontal tail surfaces was disturbed to the extent that control effectiveness under some flight conditions was compromised.

Also, in designs in which jet pods were to be mounted at the after end of the fuselage, it was necessary to relocate the horizontal surfaces to keep them clear of the jet blasts.

The solution was the so-called T-tail configuration, in which the horizontal surfaces were mounted at the top of the vertical fin structure. Where three jet engines are used, the fin structure may incorporate the air intake for the centre engine or the entire engine pod. The consequent increase in weight of the tail structure has changed the appearance of many airplanes.

To maintain a viable relationship between centre of lift of the wings and the airplane's centre of gravity, the wings were moved aft and the nose section of the fuselage was extended far forward for proper balance. For two- or four-engined planes (either piston engine or turbine-propeller combinations or turbojets), the power plants are normally distributed outboard along the wings, either in nacelles projecting from wing and edges or in suspended pods.

Jet pods are also attached to the rear of the fuselage, as indicated above. A combination of both systems (wing pods and tail pod) may be employed.

Landing-gear configuration depends on whether the aircraft is designed to operate from land airports or from water surfaces or from both. Pneumatic-tired, wheeled landing gear has been used in most airplanes since the earliest days. Spring-loaded, hydraulically damped shock absorbers take up landing impact loads.

Wheel brakes are generally hydraulically operated. Until the late 1930s the common arrangement called for a pair of wheels well forward of the airplane centre of gravity with a skid, or tail wheel, aft. The airplane rested on the ground in a distinctly nose-up attitude, only becoming parallel to the ground during takeoff and landing. In the late 1930s the undercarriage plan was reversed.

For all large aircraft and most small ones, the main wheels were moved aft to a position well behind the aircraft centre of gravity and a nose wheel (steerable) installed well forward. The fuselage remains parallel with the ground at rest, during takeoff run, and on landing.

Airplanes that are designed to operate from water are called either float seaplanes or flying boats, depending on their landing apparatus. In float seaplanes the wheeled landing gear is replaced by two buoyant floats, or pontoons. In flying boats the lower part of the fuselage is designed as a boatlike float, and smaller floats are attached to the wings.

For carrier-based planes, landing-gear configurations are similar to those for land-based planes but must be strengthened to take the extra loads imposed by acceleration (from zero to flying speed in some 200 feet [60 metres]) by catapult.

Also, fuselages must be modified and reinforced to permit installation of a tail hook to engage arresting gear cables strung crosswise on the deck in the landing area.

Another necessary modification for carrier-based airplanes is the folding wing, which makes it possible to accommodate a greater number of machines in limited hangar-deck space and to permit handling on the elevators connecting flight deck and hangar deck. 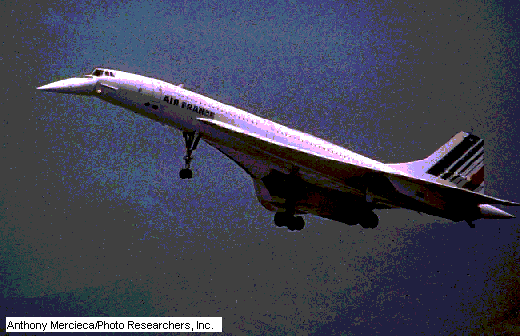